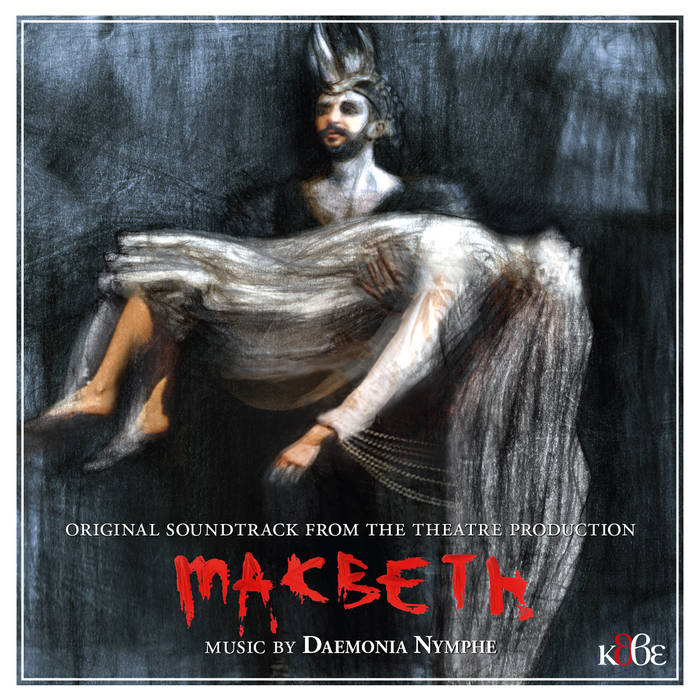 Original soundtrack commissioned by the National Theatre of Northern Greece for the theatre production of “Macbeth”! The score sees traits common to Dark Ambient or Neo-Classical discreetly introduced into DAEMONIA NYMPHE’s ethereal World Music for this aural backdrop to Shakespeare’s classic.

“Fair is foul and foul is fair” Shakespeare wrote in Macbeth and amongst those words someone might read the ambiguity of human nature, as mistakes can be beautiful capturing the soul. Beautiful catastrophe can be charming and hypnotising. Like the music and sound landscape that DAEMONIA NYMPHE created for this production. A hedonistic downfall dominates the universe of Macbeth where the isolated mountains of Scotland, the rain, the fog, the battles and the sudden storms, the moon, the howling and the screams, the witches, the trumpets and the drums become the haunting soundtrack of Macbeth. Every tune tells a different story that was hand in hand with the action and the striking images of the show. This soundtrack is a trip to the unknown and unrecognisable collective subconscious, a strange dream, a journey to the undiscovered... I would suggest you listen and you feel with all your senses.” --
Anastasia Revi

Well known for their compositions and improvisations performed with reproductions of ancient Greek instruments manufactured by Nikolaos Brass, the ethereal essence that dominates DAEMONIA NYMPHE‘s pieces allows them to reach beyond the scope of World Music and forge their own idyllic liaison with Greece’s cultural heritage.
Given their project’s unique artistic concept, an invitation for Spyros Giasafakis and Evi Stergiou to create soundtrack work would inevitably surface. Although they had already been involved in similar projects in the past, the opportunity to compose and record a full score ultimately came to fruition with a commission from the National Theatre of Northern Greece to create an original soundtrack for their theatre production of “Macbeth”. The play was directed by Anastasia Revi and performed at the Theatre of the Society for Macedonian Studies in Thessaloniki, Greece, between 15/01/2016 and 27/03/2016.

The challenge of producing an aural backdrop to Shakespeare’s classic finds DAEMONIA NYMPHE introducing discreet traits common to Dark Ambient or Neo-Classical in their music to more adequately portray the idiosyncrasies inherent to the play. While employing their trademark combination of traditional archaic instrumentation and dreamlike female vocals, DAEMONIA NYMPHE also expand their palette to include brass instrumentation, orchestral percussion or Scottish bagpipes, resorting to a myriad of guest musicians for these recordings. The complete work brings together mesmerising lullabies sung in whispers and hushed voices, epic interludes driven by bombastic trumpets, battle passages paced to martial drumming, enticing dances set to exotic rhythms, or even the odd Medieval jig heard during Macbeth’s coronation. However, even while perfectly mimicking and expanding upon each of “Macbeth”’s dramatic moments, the score also successfully stands as one of DAEMONIA NYMPHE’s most complete and mysterious albums to date.

Khruangbin and Greg Foat stop by with their amazing new LPs.